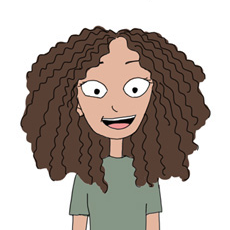 There’s something I need to say.

You see I run a blog, and when you run a blog you don’t know who is following you. I send my comics out in the world and some people read them, hidden behind their computer or iPad’s screens.
I have people following my blog from all over the world, different people, different languages, different cultures, different religions, different beliefs… I find it amazing.

I sometimes get comments from people who have a completely different vision of the world than I have, and I think it’s awesome to have the opportunity to speak with these people. I wouldn’t get that opportunity if I didn’t have this blog.

As I’m a person of curiosity and observation, I love to meet people who think differently than I do, who’ve been raised differently, who live differently, I find magic in difference and even in disagreement. That’s what life is all about, walking along the path and stopping at as many crossroads as possible, where we discover new paths, new people, new ideas, and even if we won’t follow all of them, just getting to know them is one of this life’s most beautiful adventure.

1- smart person who has a different point of view than mine and who thinks differently, who maybe knows things I don’t know > interesting, calm and courteous conversation or debate that will maybe broaden my or his/her vision. These people don’t piss me off, I like them a lot. They’re the ones who can teach me something.

2- teenager whose brain is not even finished yet so might change his/her mind later. Might not. > generally pointless to start a conversation, teenagers are passionate and think they got it all figured out. I should know, I’ve been there and I certainly wouldn’t like to try to convince the younger version of myself of ANYTHING. I’d actually rather die. Teenagers don’t piss me off, I understand who and where they are.

3- stubborn and narrow-minded adult who decided to shut his/her mind to everything he/she disagrees with. That kind of adult might piss me off for a minute or two but I don’t have time to lose so I move on and forget about it in a minute or two.

4- adult with a very fragile sense of humor or none at all, who takes him/herself or some things too seriously in life, so when it comes to some matters he/she suddenly goes blind to everything else but his/her beliefs and sees evil in places where there is none and tells YOU you’re evil. > so THIS is the kind of adult who pisses me off for real, and I got my very first comment of one today.

So on Pinterest, I posted yesterday my first comic of the “True stories” series : the story of Chekwube, a tall lady who wrote to me that when she was in high school she was very good at sports so kids started gossiping about her being a transvestite because of her height and talents, and that in the end everybody believed it.

I decided to create the “True stories” series so that people who are not aware of what things a tall or curly girl can hear sometimes and how it feels like can learn about it so either they don’t say these kind of things or they can even stand up for someone who’s dealing with these kind of things. It’s of course also a great opportunity to again downplay our problems and to again laugh at ourselves all together. I run a comics blog, so I’m not going to create sad dramatic things about it, my weapon is and will always be humor.

So I woke up very early this morning and was about to go on with my day, optimistic, enthusiastic and happy, when I saw on Pinterest the comment of this woman whose Pinterest’s profile states : “pro trans, pro GLB, pro gun control, pro choice, left leaning idealist.” and who left that comment under my comic : “Wow, way to throw vulnerable trans women under the bus for the sake of a joke. unfollowed.”

As I told her as an answer, I apparently was also ready to throw vulnerable kids who failed a grade three times under the bus for the sake of a joke.

So what I want to say to that person today is this : I run a blog where I’ve been promoting self love and acceptance through humor for over a year now. I never heard a straight haired girl tell me I’m being cruel with the straight haired girls community because I try to promote curly hair, and trying to show tall girls like myself how lucky they are doesn’t seem to make average size or short people feel bad or threatened or insulted by me. Running a blog called TALL and CURLY doesn’t make me a short and straight haired people hater.

I one day decide to ask my followers to tell me their stories so they get the chance to tell it through my comics too.

A few days ago, I posted a comic where an old man asks me – as it happened in real life – if I was a man or a woman.
One thing that hurts when you’re a tall girl let me tell you, is when someone questions your femininity. That hurts BADLY.

When I read Chekwube’s story I remembered a long time ago I was in a gay club with some friends and a drag queen – yes a drag queen – came up to me and started flirting with me. No joke. In a way it was funny, but how do you think I felt like having a man thinking I was a man too ? If I make a comic about that will it mean that I have no respect for drag queens ? I don’t think so. It REALLY HAPPENED.

So as I could really imagine how hurt Chekwube must have been when she was called a transvestite by an entire school, and as it happened to her and to me, I’m pretty sure it didn’t happened to only us, so I chose to tell her story in a comic so somewhere some tall girl can relate and feel less alone.

I grew up feeling DIFFERENT and I had to learn to LOVE and ACCEPT being DIFFERENT. It was a battle and a battle so tough to win I just wish anyone who feels different and alone can find some comfort in some of my comics. That’s what most of the messages I get say : “Thank you for making me feel ok with being different.” I’m in a race for happiness and I believe everybody is, and I believe everybody deserves to find happiness. EVERYBODY.

But one thing I’ve learned from fighting in order to love myself is that you CANNOT TAKE YOURSELF TOO SERIOUSLY IN LIFE. That is exactly what leads people to feel threatened, to be scared, to be frustrated, to feel like they’re always a VICTIM.

If you’re able to laugh at yourself, you won’t mind that much when other people laugh at you. And believe it or not : YOU ARE FUNNY IN SOME WAY. EVERYBODY IS. Everybody is or has something that somebody else will laugh at, there’s nothing you can do about it but to embrace who you are and to laugh too.

I live my life according to the three L’s principle : LIVE, LOVE, LAUGH.

Life is hard for everyone, and everyone must choose a weapon to fight.

I CHOSE LOVE AND LAUGHTER. So if you’re not able to see BOTH in my comics, I agree with you you shouldn’t be reading it and thank you for unfollowing.

And here‘s a video I love, of a beautiful person who knows that : difference + humor = great match. 🙂