I tried to be short. Didn’t work.

Then I thought : “Hey! Let’s try something new and be myself!”

And that is : tall, and curly.

I have created this blog for those days when, if there was a vaccine against inches or curls, I would run to get an injection.

My story as a Tall N Curly person

I’ve received a few messages asking me if I keep my hair natural or not, if I have relaxed my hair before, and if I’m against relaxing.

I also got a comment on my Pinterest profile that made me realize some people might think that because I draw all these comics about being tall and curly, I hate being one or the other, or both.

Therefore I’ve decided to add some details in my about section so that everyone can understand my approach concerning my blog and comics.

The comment on Pinterest said that I should enjoy my hair because kinks are in. In other words : that I should stop complaining about it. I must admit I didn’t really see the connection between kinks being in or not and the fact that curly/kinky hair is very difficult to manage and sometimes complicated to deal with.

I’ve been natural for over 10 years now. Before that, I’ve relaxed my hair for about 10 years. And before that, my hair was kept natural. The problem is, being multiracial and my mother being white, she just never could figure out what to do with my hair and didn’t teach me a single thing about it.
Things were okay until I was 9 because my hair was very long and I always wore one or two big braids. But one day my mom decided to cut it very short because she found it too difficult to wash, comb and style. A little girl screaming for two hours when you’re trying to detangle her hair can get really nerve-racking – I guess.

So I went from this : 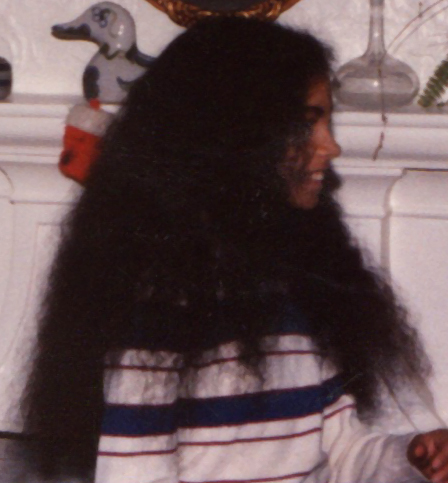 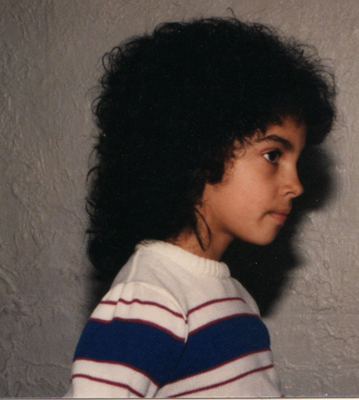 Please notice the smile in the before pic, and the “WTF” look on my face in the second one. Ooooh was I happy.

And so from there on kids started to make fun of me because I looked like a poodle, a sheep, a boy, the Jacksons 5… name it.

I had no idea know how relaxers worked, so I went to this afro hair salon. I’ll never know whether the hairdresser didn’t like me or if she had missed a class in hairdressing school, but she relaxed my hair from the roots to the ends everytime I went there, which means every two months for 2 years.

My hair is veeeery thick and strong and I think it’s the only reason I’m not bald today.

Anyhow, one day I mentioned it to a girlfriend – didn’t think of mentioning it before, I didn’t even know there was a problem. I only knew my hair looked like sh*t, was dry as the Sahara, and almost cut my cheeks at night because it was so hard. The only thing that mattered to me at that time was that it was straight and manageable.
So my friend looked at me with big eyes and told me it was a miracle I still had hair. I stopped going to the hair salon and started relaxing my roots myself.

I remember hating my hair at that time, but as I said, it was manageable. At least.
I used to look at straight haired girls, envying their hair. I wanted their hair, I used to think they were the lucky ones. Like if I was born missing a leg or something. I simply couldn’t see my hair like a strength, a quality, something nice that made me special. I only felt handicapped. I tried to convince myself that straightening my hair made me part of the straight haired girls gang, glamorous and all, when I actually looked more like an old and worn out broom.

I think I would have relaxed my hair all my life if, when going to college, I hadn’t found myself tired of focusing on my hair instead of on my studies.

I remember one day looking at myself in the mirror, my roots being 2 inches long. You know when you have this adorable palm tree look, with the hair going up a little bit before falling back down like polluted waterfalls. It was time to relax.
But it was winter, it was cold outside and snowing, and I just didn’t feel like going out of the house. I had homework to do – homework that I loved because it was drawing homework – so suddenly I thought “Oh screw it. Damn hair. Do whatever you want.” And so it started to grow. 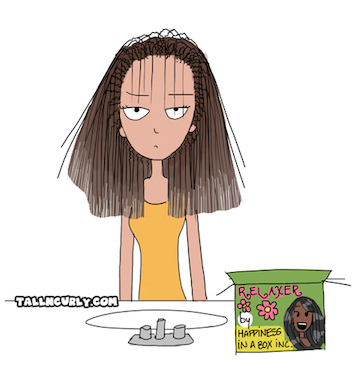 Months later I had to cut the relaxed part of my hair. I ended up curled up in my bathroom crying because as I’m tall, the little fro I had around my head made me look like a giant microphone.
Still, I don’t know why, I chose not to go back to relaxing only to gain a few inches. I decided to wait. And my hair grew and grew and grew. I didn’t have a clue about how to comb it, style it, wash it or take care of it. I was a newbie. I was getting mad at it 99% of the time. I thought so many times going back to relaxing you have no idea (or you do

The thing is, growing up, we all learn things about life, and the path I chose brought me closer to nature. Looking for the truth everywhere I now believe everything happens for a reason. And in “everything”, there is my hair. I was born with this hair. There must be a reason for that too. So although I still – and will always – get angry a lot at it, I now respect my hair for what it is : a part of me.
Actually it’s not that different from who I am. I’m pretty stubborn and rebellious too. What was I expecting from it ?

So to answer the question “Am I against relaxing?” I will say that I understand when girls with curly/kinky/nappy hair choose to relax it. I understand because it’s complicated and sometimes expensive to take care of this kind of hair. I don’t judge girls who relax their hair. It can turn out very pretty when it’s done right. So no, I’m not the naturalista-power-dictator kind of girl, no.
On the other hand, I find curly/kinky/nappy hair not only beautiful, I find it magical. This kind of hair is strong in essence. It’s the root. The origins of hair. It’s a force of nature. It looks like there are magical powers in it. There’s something magical about a woman who walks proudly in the street with this big, voluminous, “do-you-have-something-to-say?” hair. She walks on top of the world. She couldn’t care less about what people think or say. She couldn’t care less about what products or beauty ideal the magazines are trying to sell her. She’s not discreet. She does not hide. She is there. She IS. And to have the courage and the pride to BE who you are, under everybody else’s eyes, THAT’S magical.

I also tend to find that a curly girl is always prettier when she wears her hair curly. Simply because it’s her! Her true self! How could it be better than that? She can be pretty with her hair straightened too. I blow-dry my hair sometimes and I like the way it looks. But I always end up being in a hurry to go back to my curls, and right after I washed my hair, seeing my curls living again in the mirror gives me the feeling I’m back to my true self.

If a girl relaxes her hair, I will respect her choice. But if I see the tiniest shadow of a doubt in her attitude, the kind of “I’d like to go natural but I’m afraid of what other people may think” I’ll definitely encourage her to stop putting dangerous chemicals on her head and to walk the path to learning to love herself in spite of others’ opinion. And to walk that path, you have to learn to love or at least accept every single thing about yourself. The curls are often a big part of the journey.

So people, I LOVE my hair.

Still I fight with it all the time, and that’s why I find it funny to draw some of these experiences because I know – I hope hahaha – I’m not the only one having to deal with all of this.

I’m 6′. I used to hate being tall too. I went to the same school from age 6 to age 16, and during all the time I’ve spent there, the same kids who made fun of me because of my poodle haircut made fun of me because of my height. I can tell you it’s very difficult to love something about yourself when everyone has been telling you that you look ridiculous for over 10 years. I admit it, it took me ages to get over it.

I did model for 3 years or so, and it did help me accepting my height. I definitely wasn’t the tallest girl in the runway shows, and wearing heels seemed to be normal for all these giant beautiful girls so I started to think being tall wasn’t that of a curse. It still felt weird sometimes and I was having a hard time understanding what I was doing amongst the models, and I still had to work on myself a lot to stop focusing on what shorter people had to say about me all the time, but eventually it did help.
Some may think being a model should have cured everything instantly but it didn’t. My complexes were too deeply ingrained!

Another thing that helped me a lot is that my cousin is very tall too. She’s 6’3″ so we shared a lot of the tall girls problems and learned to laugh about it together.

The journey to accepting my height was pretty much the same as accepting my hair. One day I simply got sick of feeling bad about it. I decided that I came on Earth with these extra inches, so that I had to deal with it. There was reason for that too. I worked hard and had to hush my complexes, but today I feel great about my height and wouldn’t let go half of one of my inches. I wear heels, I walk with my head up, I’m proud.

Still, like for the hair, being tall can be REALLY challenging because you have to deal with other people’s remarks, questions, and sometimes stupid attitude. That’s what I like to share through my comics, because again, I know I’m not the only one going through this.

Lastly, the fact of being tall AND curly, let me tell yall, that’s something you better accept and love because otherwise, your life can be a hell of a nightmare. You simply CANNOT HIDE, no matter what you do, no matter where you go, no matter how hard you try. You are THERE. So yeah, some days you just feel like you could have used a little bit of invisibility, but in the end, all that matters is to feel great about yourself at least 99% of the time. That’s where I’m at, so I’m able to laugh about everything that makes a curly and/or tall girl’s life sometimes irritating, and so that’s how and why I draw my lil comics 🙂